Everything in life is vibration

We have long been aware of music’s healing effect on the human body. Music therapy is being used for the treatment of psychological disorders, tinnitus, cardiovascular diseases and, lately, to help with neuronal development in premature babies.¹-² For example, a review of 73 randomized clinical studies from the year 2015 demonstrated that – largely irrespective of the kind of music – there were improvements in both participants’ anxiety states and levels of pain.³ Scientists have spent years trying to find out whether music not only effects overall healing processes, largely mediated via the brain, but also processes at the cellular level.

Bacteria and algae react to music

Bacteria and algae are at the bottom of the tree of life. Can music affect the growth and productivity of such simple cells?

East Indian researchers wanted to know how bacteria or fungi grow under the influence of music, what metabolites are produced and whether there are changes in antibiotic sensitivity.⁴ A total of eight different kinds of microorganisms were exposed to the sound of classical, East Indian music at a frequency of 41 to 645 Hz and a volume of 95 to 110 dB. With the exception of Serratia marcescens, all the microbes tested exhibited better growth with music compared to the controls. Furthermore, the production of bacterial pigments (prodigiosin and violacein) and also the sensitivity to antibiotics were boosted. Compared with controls, cation concentrations (calcium and potassium) also proved to be significantly changed in test cultures exposed to sound. Finally, baker’s yeast Saccharomyces cerevisiae showed a higher tolerance to alcohol under the influence of music.

Whereas the microbes were confronted with East Indian music, in another study micro-algae of the genus Haematococcus pluvialis were subjected to either the rather discordant piano piece “Blues for Elle” or “Far and Wide,” based on a flat frequency response.⁵ The algae were subjected to the music at about 60 dB (the volume of speech) for a total of 8 hours over a period of 22 days. Interestingly, the scientists were able to find differences between the two pieces of music in relation to the production of algae: a growth rate of 0.03/day was registered under the influence of “Blues for Elle,” 0.015/day for “Far and Wide” and 0.011/day with no music (control). Thus, under the influence of “Blues for Elle” the growth rate of the algae proved to be 58% higher than the protected algae control group.

Human cells also react to music – and not just highly specialized mechanosensitive, hair receptor cells, which have been configured by nature to pick up acoustic waves. In a study published in the journal “Noise & Health” human breast cancer cells of MCF-7 line were subjected to music by three different composers: Mozart’s Sonata for two Pianos, Beethovens 5th Symphony or Ligetis’ Atmosphere.⁶ All three pieces were played at a volume between 70 and 100 dB for over 30 minutes While the control cells that were not exposed to sound featured a typical histogram with two peaks (G0/G1 and G2/M phase), the serenaded breast cancer cells showed a significant cell concentration in the S phase (synthesis phase) and a cell reduction in the G/M phase. Furthermore, the cell size, cell granularity and hormone binding capacities of the cells exposed to classical music changed compared to the control population. In 2016, following the MCF-7 breast cancer cell test, additional cell lines of this carcinoma (incl. MDAMB- 231) were also tested under the same musical conditions by the same researchers.⁷ After exposure for 48 hours and compared to the control, the percentage of living MCF-7 cells decreased under the influence of Beethoven and Ligeti (p<0.05). MBA-MD-231 breast cancer cells were even more sensitive initiating cell death under both Beethoven, Ligeti and Mozart compared to controls (p<0.05). The authors concluded that cell changes may not only be due to the kind of music exposure but also particular cell characteristics. 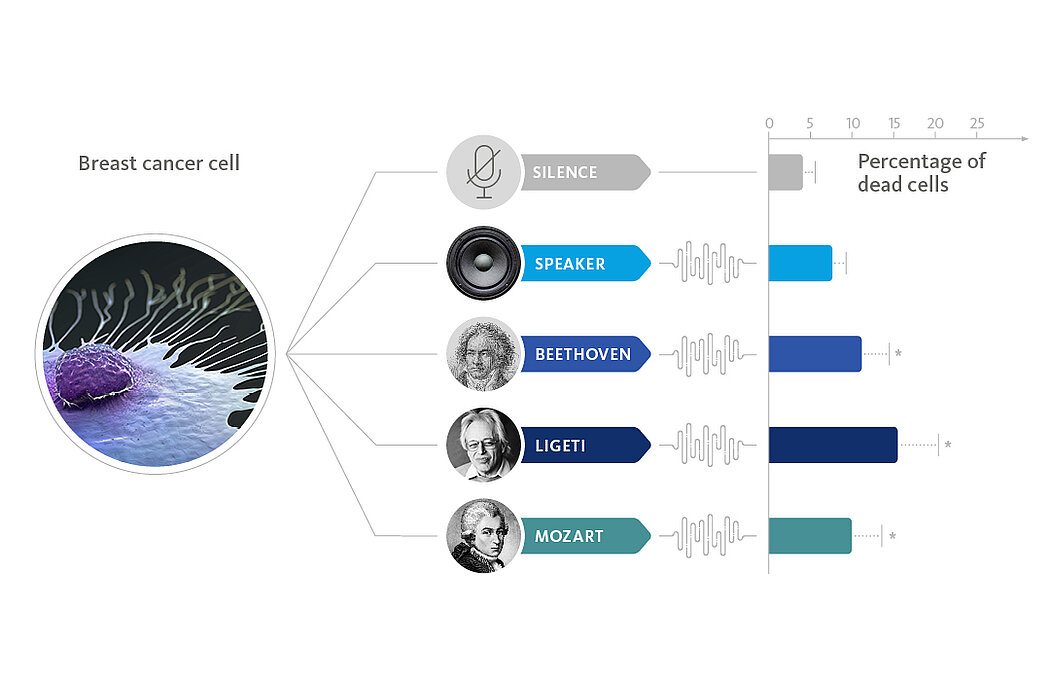 Breast cancer cells (MCF-7) were exposed to Beethoven’s 5th Symphony, Ligeti Atmosphères, or Mozart's Sonata for Two Pianos, and were incubated for 48 h. The three compositions significantly increased the percentage of dead cells (late apoptotic cells) compared to silence or the magnetic field of a speaker.⁷
* Significant when compared with silence (p<0.05)

Cell proliferation and decrease in cells

United States scientists exposed several strains of oral mucosa cells to a less sophisticated “musical” test, i.e., the sounds of an electric toothbrush.⁸ The cell cultures were exposed to he acoustic energy of a toothbrush twice a day in the laboratory for 0, 15, 30, 60 or 120 seconds over ten days at 261 Hz with 87 dB (volume of a saxophone playing). Mucosa cells reacted differently depending on the duration of exposure. While sound exposure for more than two times 30 seconds/day increased the cells by 25.5%, two times 120 seconds/day of sound exposure resulted in a 30.9% decrease in cell number (p<0.001). Authors concluded that sound energy modifies the behavior of cells in culture. Conversely, collagen production by fibroblasts remained unimpacted by the exposure to sound and stayed at the same level in all groups.

Sound waves are mechanical vibrations which continue through the air as variations in pressure and density. Scottish scientists have been investigating the question of how vibrations affect the growth of stem cells. Not only chemical substances but also mechanical stimuli can induce stem cells to differentiate into different cell types, such as bone, cartilage, ligaments or muscles. Adam Curtis, Professor for Cell Energy at the University of Glasgow, realized that cells “creep around” on surfaces. How would such cells behave if they were subjected to minor vibrations on these surfaces? In fact, natural bodily processes, such as walking, breathing or kissing, also generate “nanovibrations” with a frequency range of around 970 Hz. Using a self-developed bioreactor, the Scottish researchers were able to show that irrespective of other external factors, mesenchymal stem cells differentiate into mineralized three-dimensional tissue when impacted by so-called nanokicking resonating at around 1 kHz.⁹ “Bone marrow-derived stem cells converted into osteoblasts on a large scale in our experiments, and without the use of chemical cocktails or highly complicated technology,” explained Matt Dalby of the Centre for Cell Engineering at the University of Glasgow.¹⁰ Apart from continuing the “bone work,” the team is now planning cooperations with rehabilitation specialists in order to help patients with bone marrow injuries. 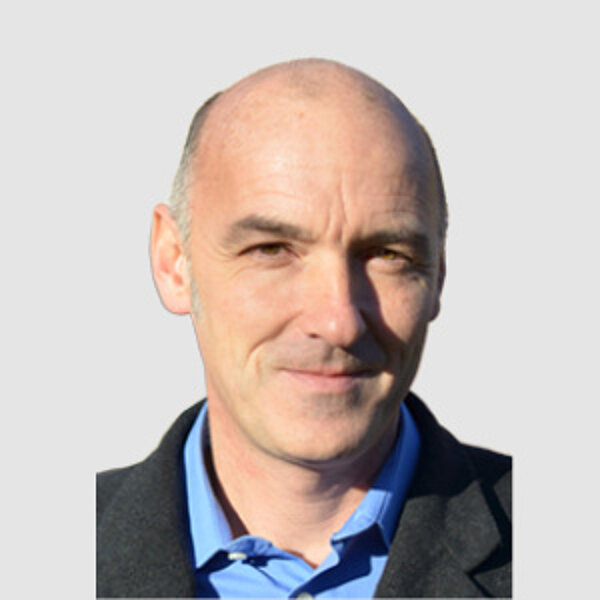 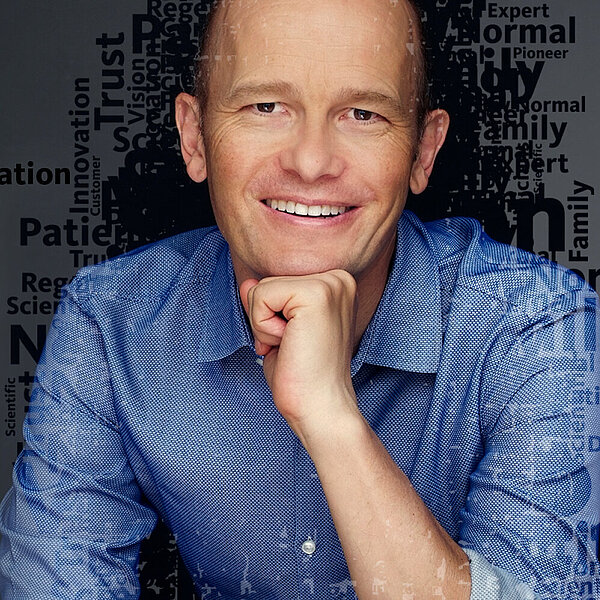 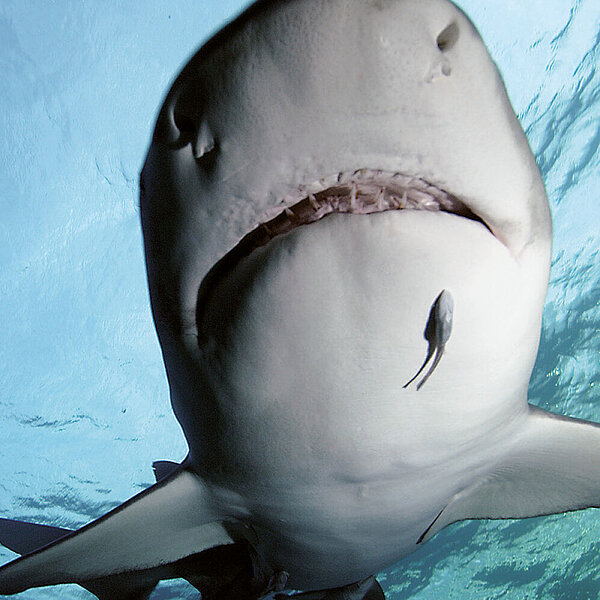 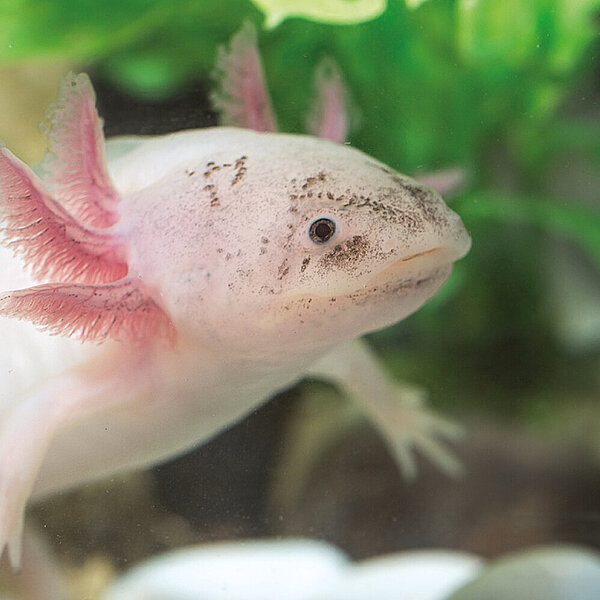 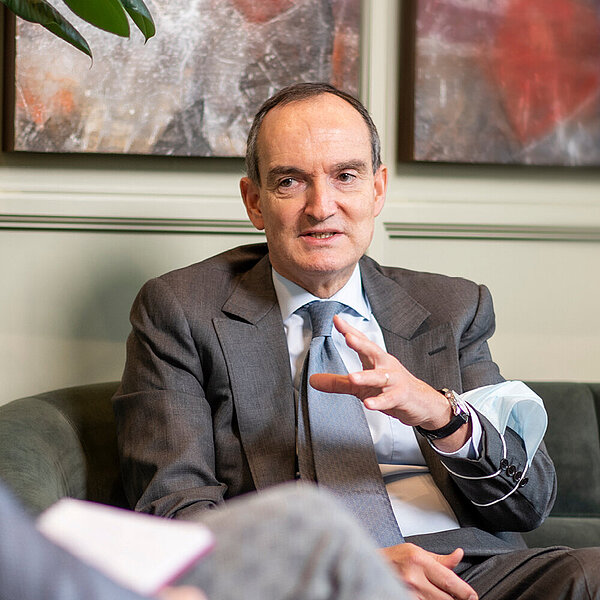 Interview
“We want to carry the message of regeneration"
Paul Note has been at the helm of Geistlich Pharma for 16 years. We look back with him on the eventful and expansive time at Geistlich. →

Interview
“We want to carry the message of regeneration"
Paul Note has been at the helm of Geistlich Pharma for 16 years. We look back with him on the eventful and expansive time at Geistlich. →
Cookie settings